Posted at 16:37h in Uncategorized by citadmin 2 Comments
0 Likes
Share 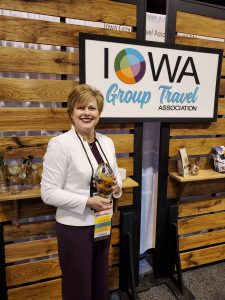 Kim Grzywacz with CIT Signature Transportation headquartered in Ames was honored by her industry peers as the 2020 Women In Buses award recipient on January 12, in Omaha, NE, at the American Bus Association’s National Conference (ABA’s Marketplace). The Women in Buses award, sponsored by MCI (Motor Coach Industries), recognizes the role of women in the motorcoach industry who work collaboratively on issues and concerns of women business leaders as well as industry specific trends in this male-dominated industry.

The winner is chosen from nominations submitted to the leadership team of the Women in Buses Council. Patricia Ziska, Vice President of New Coach Sales at MCI stated during the presentation, “She is constantly looking to get people involved in Women in Buses. If you ask a number of members, they will tell you, she brought them in. She promotes ABA and tourism and is so enthusiastic about any task she is assigned. She is an excellent example of a positive attitude and figure for our industry! Her energy has left people wondering where she gets it all.”

The Women in Buses Council (WIB) was created in 2011 to recognize and advance the role of women in the motorcoach industry through networking, education, and mentoring programs. Its more than 194 members convene regularly for committee meetings, webinars, and Marketplace. Kim began her career in the motorcoach/tourism industry in 2012, joining her husband’s company. During this time, Kim has served as the WIB membership chair, chairman, and currently as the past chair. She serves on the following board of directors: the American Bus Association, the Iowa Group Travel Association, and the FIRE Foundation of Northeast Iowa. Kim will tell you it is the relationships you build and the connections you make that she finds most valuable.

View her expression of gratitude at https://www.youtube.com/watch?v=gC0ZxHl5LIM

Cancel Reply
﻿
We're committed to providing safe transportation services and are working through the challenges of COVID-19. CIT Signature Transportation has been actively seeking enhanced protocols to implement to ensure optimal virus mitigation for our passengers and drivers. Learn More.
+ +